A 37-year-old man is facing charges of impersonating a police officer after deputies say he followed a 23-year-old motorist, while flashing a badge and yelling at her about her driving in East Naples late Monday night.

Christopher J. Worrell had a loaded handgun, handcuffs, knives, boxes of ammunition, and a badge in his possession when deputies arrested him, according to Collier County sheriff’s reports.

The Hummer pulled up alongside Bower’s vehicle as she headed west on U.S. 41 East. The driver, Worrell, showed her a gold badge and signaled for her to roll down her window. Bower, who works as a CCSO emergency dispatcher, told deputies that she did not recognize the badge.

Worrell began yelling at Bower, telling her that she ran the red light.

Bower told Worrell that if she ran the red light, then he did too. She told deputies that he Worrell said that he is allowed to run red lights, “to catch up to people like you.”

Worrell then pulled the Hummer behind her vehicle, leading her to suspect he was a law enforcement officer about to pull her over.

Deputies spotted Worrell driving the Hummer east on Davis near Airport-Pulling shortly before 9 p.m. Deputies conducted a traffic stop and arrested him.

A search of the Hummer turned up:
* A gold Florida concealed firearms badge
* A loaded .40 caliber Glock with a bullet in the chamber
* Three Glock magazines
* Two pairs of handcuffs and keys
* 100 extra rounds of .40 caliber ammunition
* Multiple 12-gauge shotgun shells
* Two pocket knives
* Flashlight
* A can of pepper spray

CCSO offers these tips on how to stay safe from law enforcement impersonators and allow officers to do their jobs:

* Activate your hazard lights to notify the officer that you are complying with the request to pull over.

* If it is dark, pull over to a well-lit area, such as a convenience store.

* Call 911 on your cell phone and ask the dispatcher to verify that it is an officer trying to pull you over. Have the dispatcher verify your vehicle description and your location and stop when it’s safe.

* If it is an undercover car with a plainclothes officer, request that a marked patrol car with a uniformed officer respond.

* When you do stop, do not get out of your vehicle. Stay inside and lock your car doors. Look for an official agency badge, equipment or uniform. If the officer is in plainclothes, you can request that the officer show some identification. You can even call dispatch again to confirm their identity.

* Officers should immediately tell you why you are being pulled over.

* Trust your instincts. Call your local law enforcement agency immediately if you have concerns. 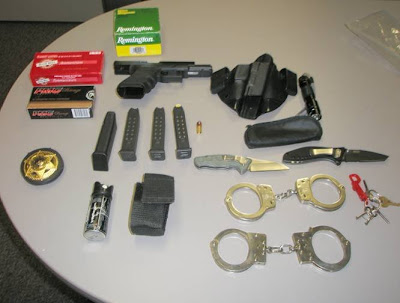 Deputies recovered these items from inside Christopher J. Worrell's
vehicle following his arrest Monday night.
Posted by colliersheriff.org at 11:19 AM