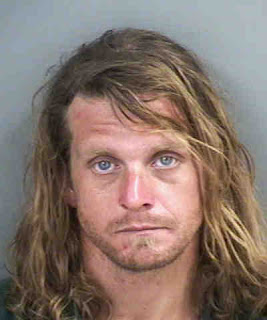 A homeless man was arrested Wednesday after deputies say he broke into a car and stole a purse containing $300.

Deputies searched the area but were unable to locate the suspect, but the couple's daughter found a wallet on the ground near the car. The Florida ID inside belonged to Charles Fredrick Holzwarth, 33. Lopez and Patino identified Holzwarth from his ID photo as the man they saw inside the car.

Deputies located Holzwarth on Wednesday afternoon at the Collier County jail, where he had been since Tuesday following his arrest on nonrelated narcotic charges. He was additionally charged with burglary and grand theft.
Posted by colliersheriff.org at 4:16 PM