CCSO joined forces with state and federal law enforcement officers in a coordinated simultaneous effort to snuff out grow houses across Florida and parts of Georgia.

Operation Eagle Claw was spearheaded by the South Florida High Intensity Drug Trafficking Task Force. The goal was to disrupt the grow house epidemic that has been afflicting the state, officials said.

Investigators also discovered a recently dismantled marijuana growing operation at 3570 10th Ave. N.E., also in the Estates. Investigators said there was equipment used to grow marijuana inside the garage, but there were no marijuana plants.

During the operation, investigators uncovered a total of 156 plants with a combined estimated street value of $468,000. They also recovered a loaded 9mm firearm.

Collier County Sheriff Kevin J. Rambosk said the community has made it known that shutting down grow houses is a priority for Collier County. He also thanked area residents for providing information to help CCSO locate them.

“These types of operations pose a significant threat to our neighborhoods, our children and our families and I applaud our citizens for working with us to identify them and stop them,” he said.

Another man is also facing possible charges in connection with the grow operation at that residence, investigators said. Deputies arrested Christopher Robin Hammerstone, 35, at his residence at 3435 60th Ave. N.E., Golden Gate Estates, on an active warrant out of Lee County charging him with violating his state probation on a charge of sale/manufacture/delivery of marijuana over 20 grams. 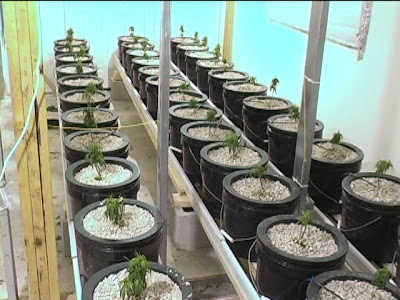 Some of the 63 marijuana plants uncovered by CCSO deputies at a residence at 940 Wilson Blvd. in Golden Gate Estates as part of Operation Eagle Claw on Wednesday. Photo by Efrain Hernandez/CCSO

Posted by colliersheriff.org at 1:06 PM