Matthew, 12, Brian, 11, and Sarah, 13, found a canoe drifting down the canal behind 17th Avenue Southwest in Golden Gate several weeks ago. They’ve been using the canoe, which they named “Environmental,” to collect debris in the canal most afternoons.

County-issued trash and recycle bins can’t keep up with the amount of trash the kids collect. Tires, furniture, a bench, a sprinkler system, brooms and mops, along with dozens of bottles and cans, are among the items they’ve dredged up.

The youngsters’ cleanup efforts have earned them special recognition from the Collier County Sheriff’s Office.

The Sheriff’s Office has invited Brian, Sarah and Matthew to spend the Fourth of July holiday with deputies on a CCSO boat on the Gulf of Mexico watching the fireworks off Naples Pier.

“We’re just trying to reach out and get our arms around some of these kids who really need to be recognized and to give them a little different perspective of what we do,” said Cpl. James Vliet of CCSO’s Marine Bureau.

The experience will be entertaining as well as educational, said Cpl. Vliet. The youngsters will each receive quality life jackets and handheld radios, donated by West Marine, he noted.

Brian and his sister Sarah say they’re looking forward to the experience. Their friend Matthew will be out of town that day and won’t be able to make the trip.

“I’ve never watched fireworks on a boat,” Brian said. “I think that’s real nice and it will be really fun.”

“I think it will be really fun and a good opportunity to get noticed for what we’re doing and to show other kids how to take care of the environment,” she said.

CCSO will provide Brian and Sarah with transportation to and from Bayview Park in East Naples, where the siblings will board a 32-foot Donzi patrol boat with deputies. From there they’ll head out to the Gulf to watch the city of Naples fireworks display off the Pier.

Kate Davenport, Brian and Sarah’s mom, said the youngsters work hard cleaning out the canal, which runs behind the family’s house. They’ve even found uses for some of the trash they pick up like plugging holes in their back fence with tires to keep animals that the family rescues from getting out and using buckets and long sticks to collect more trash.

She lauded CCSO for recognizing them.

“These are just great kids,” Davenport said. “I think it’s absolutely phenomenal that the Sheriff’s Office is doing this.” 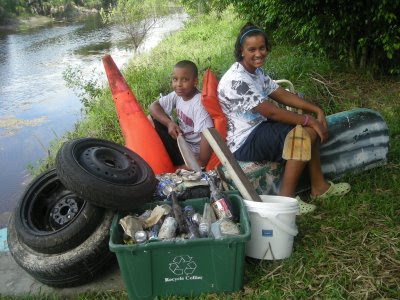 Brian and Sarah Davenport will watch the Fourth of July fireworks with deputies on a Collier County Sheriff’s Office patrol boat on the Gulf of Mexico on Saturday. CCSO is recognizing the siblings, along with their friend Matthew Hayes, for their efforts cleaning up a Golden Gate canal. Photo courtesy of Kate Davenport.
Posted by colliersheriff.org at 11:00 AM