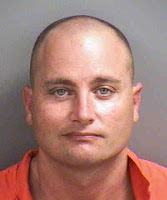 An employee worked the sales floor at Saks Fifth Avenue on Tuesday wearing a designer shirt and socks that he did not pay for, detectives said.

Further investigation revealed the employee, Frank Steven Randazzo, had stolen other articles of clothing from the store at Waterside Shops in North Naples over the past three months, totaling $1,480.

The store’s loss prevention manager told detectives that around 10:20 a.m. Tuesday he saw Randazzo select a shirt from the men’s stock room and remove it from its packaging. Randazzo then took off the shirt he was wearing and put on the shirt he had removed from the package, reports said.

The manager said that later in the afternoon he saw Randazzo select a pair of socks from the sales floor and take them to the stockroom, where he put them on, reports said.

The manager saw Randazzo place the shirt and socks he had worn to work that day inside his take home bag. Then he returned to the sales floor wearing the new merchandise, which he did not pay for nor did he keep the tags to pay for the items at a later time, reports said.

Randazzo was charged with stealing a Boss shirt valued at $145 and a pair of Falke Tiago socks valued at $20.