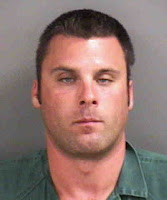 A North Naples man was in jail Tuesday after he called 911 from his cell phone to report shots fired in an effort to divert a deputy from arresting him for driving with a suspended license, sheriff’s reports said.

A deputy in a patrol car was traveling west in the 2300 block of J&C Boulevard around 1 a.m. when he noticed a gray Toyota traveling east on J&C at 45 mph in a 30 mph zone.

The driver of the Toyota, Rorech, told the deputy that he left his North Carolina driver’s license at home. When the deputy asked him where he was coming from, Rorech said “South Street.”

The deputy returned to his patrol car and ran Rorech’s information through his mobile data computer, where he discovered Rorech did not have a driver’s license in Florida or North Carolina.

During the traffic stop, the deputy received a report of a shooting with “one subject on the ground” at South Street Bar & Grill in North Naples.

The deputy decided to respond to the shooting and sent Rorech on his way.

When the deputy arrived at South Street he was informed by his supervisor that there was no shooting and nobody was injured. The deputy immediately suspected the 911 call reporting the shooting was false.

Further investigation by the deputy revealed the 911 call came from a phone number with a North Carolina area code. The deputy called the phone number back and received Rorech’s voice mail.

Later, the deputy listened to the 911 call and recognized the male caller’s voice as being Rorech.

The deputy drove to Rorech’s apartment complex and waited for him to return home. Rorech pulled his car into the parking lot outside his apartment around 2:25 a.m. and the deputy arrested him.


A search of Rorech’s vehicle turned up a cell phone in the center console. The phone’s battery had been removed. The deputy put the battery in the phone. A sheriff’s dispatcher then called the phone number that the 911 call was made from. Rorech’s phone rang.
Further investigation revealed Rorech’s driver’s license was suspended out of North Carolina.
Rorech was also charged with two misdemeanor counts of driving on a suspended license – one for the initial traffic stop and the other for driving home, reports said.
Posted by colliersheriff.org at 11:26 AM