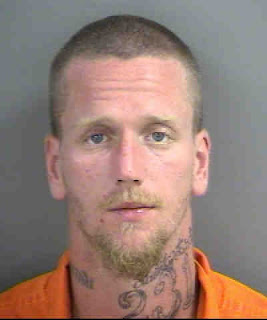 UPDATE: Monaghan was arrested Friday during a traffic stop in the New England area.

He has been charged with violation of state probation, bank robbery and felony theft. Monaghan will be extradited back to Collier County.

Additional information will be released as it becomes available.

An arrest warrant out of Collier County has been issued for Monaghan for violation of state probation. Monaghan was released on probation from the Collier County jail on July 24 after serving four months.

Detectives said Monaghan will also be charged with the July 26 robbery at the Iberia Bank branch at 775 Airport-Pulling Road.

Monaghan is described as white, 6 feet tall and 180 pounds with short blond hair and blue eyes. He has numerous tattoos on his body, including the numbers “231” on his neck.

His distinctive tattoos, along with witness accounts and bank surveillance photos, helped link Monaghan to the bank robberies in East Naples and in Florence, S.C., and Darlington, S.C., detectives said.

In addition to Collier County, Monaghan has numerous arrests on criminal offenses in other jurisdictions, detectives said.

Monaghan is considered armed and dangerous. Deputies caution the public not to approach Monaghan or make contact with him.

Anyone with information on his whereabouts is asked to call 911 or your local law enforcement agency.
If you have general information, please call Crime Stoppers at 1.800.780.TIPS (8477).
Posted by colliersheriff.org at 11:07 PM