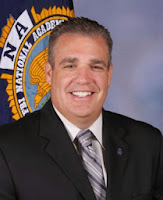 The principal speaker at the ceremony was FBI Director James B. Comey.

Internationally recognized for its academic excellence, the National Academy Program offers 10 weeks of advanced investigative, management and fitness training for selected officers who have proven records as professionals within their agencies. On average, graduates have 19 years of law enforcement experience and usually return to their agencies to serve in executive-level positions.

This was the 254th session of the National Academy. It was made up of men and women from 49 states, the District of Columbia and 22 countries. Three military organizations and one federal civilian organization were also represented in the class.

Captain Guerrette has dedicated his entire career to public safety. He served in the U.S. Air Force and with the Florida Marine Patrol before becoming a CCSO Deputy Sheriff in 1993.

He earned a bachelor’s degree in business administration at Hodges University and is currently pursuing a master’s degree in administration at Barry University. He serves as an instructor with the Southwest Florida Criminal Justice Academy, Florida Attorney General’s Office and St. Petersburg College. Captain Guerrette is also on the board of directors of Youth Haven and member of the Leadership Collier Class of 2008.

Even his hobbies overlap into law enforcement. His love of technology led him to create and develop the agency’s iPhone application CCSO2go.
Posted by colliersheriff.org at 12:06 PM