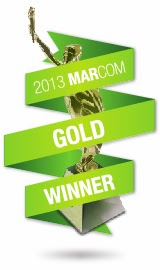 The Collier County Sheriff’s Office’s “We Must Stop Texting And Driving” campaign has earned a Gold Award from the Association of Marketing and Communication Professionals (AMCP), which oversees the annual MarCom Awards.

The campaign, which launched in November 2012, earned gold level recognition in the competition. It was a community-based, grass roots movement to address the growing demand for Florida to declare it illegal for drivers to text behind the wheel.

Sheriff Kevin Rambosk invited those who supported the concept of anti-texting legislation to sign a call to action on www.change.org. Links to the call to action were posted on the agency’s website, www.colliersheriff.org, and its Facebook page, www.facebook.com/colliersheriff.

The Sheriff also invited community members to share their texting and driving experiences on the agency’s social media platforms, telling them, “Your story matters.”

For the first week of the campaign, visitors to www.colliersheriff.org saw that the entire home page was a special site, or dark site as it is referred to in marketing, devoted to anti texting and driving information. The site connected visitors with anti-texting resources including the call to action and PSAs. It provided them with statistics, including the fact that text-messaging while driving increases the likelihood of a crash by up to 23 times.

For those who wanted to display their support for anti-texting legislation, CCSO’s Crime Prevention Unit provided red wristbands that carried the words, “I won’t text and drive” at community functions. In addition, CCSO Youth Relations Bureau deputies distributed the wristbands to students in driver education class as part of a presentation on the danger of texting while driving.

In the end, the campaign was highly successful. Sheriff Rambosk delivered the signatures of more than 1,000 supporters to legislators. Most significantly, Gov. Rick Scott signed legislation on May 28 that makes it illegal to text-message while driving in Florida.

There were more than 6,500 MarCom entries from the United States, Canada and several other countries. Winners were selected across more than 200 categories in seven forms of media and communication efforts – marketing, publications, marketing/promotion, public service/pro bono, creativity and electronic/interactive.

Click here to learn more about the “We Must Stop Texting And Driving” campaign.
Posted by colliersheriff.org at 1:25 PM