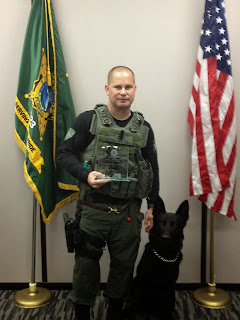 Cpl. Thomas Sweeney and his K9 partner Boss were honored as the 2013 Patrol Dog Team of the year by the Florida Law Enforcement Canine Association. They were recognized during an award ceremony at FLECA’s annual conference in West Palm Beach on Wednesday, Oct. 30.

In November 2012, Cpl. Sweeney and Boss responded to an armed bank robbery at the Florida Community Bank in Golden Gate. The two suspects involved were not immediately located despite an exhaustive search conducted by the Collier County Sheriff’s Office. However, Cpl. Sweeney and Boss were able to track down some key evidence containing the suspects’ DNA. This DNA evidence eventually led to the identification and apprehension of both men.

Photo submitted by Cpl. Thomas Sweeney/CCSO
Posted by colliersheriff.org at 10:34 AM