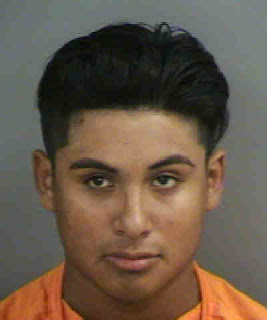 An 18-year-old East Naples man who is in the Collier County jail awaiting trial on an attempted sexual battery charge has been charged with a second sex attack based on a DNA match made while he was behind bars.

Johan Herrera, 5370 Sholtz St., was arrested Tuesday and charged with sexual battery in connection with a July 18 attack on a woman in East Naples.

The victim was in a parking lot at 5130 Rattlesnake Hammock Road at 1:30 a.m. when a man approached her from behind, threw her to the ground and sexually assaulted her, according to Collier County Sheriff’s Office reports.

This week detectives were notified that the FBI’s Combined DNA Index System (CODIS) had identified Herrera as a suspect based on DNA collected from the crime.  Detectives interviewed Herrera at the Naples Jail Center on Tuesday, and he confessed.

At the time of his arrest, Herrera was in jail awaiting trial for an Aug. 1 attempted sexual battery in a parking lot located at 11225 U.S. 41 E. in East Naples.

In that case, the victim told detectives that she was in the parking lot waiting for a friend when she was approached by a man who asked her to go back to his place. The man grabbed her, punched her in the face and attempted to sexually assault her.

The woman was able to run away and summon help.

The attack was captured on video surveillance and a bulletin was issued with photos of the suspect. On Aug. 23, a CCSO deputy saw a man wearing a hat who matched the surveillance photos in the bulletin. The man appeared to be wearing the same hat as in the photos.

Through further investigation detectives identified the man in the photos as Herrera.

The victim positively identified Herrera as her attacker. Deputies arrested Herrera on Sept. 7.

Posted by colliersheriff.org at 2:21 PM