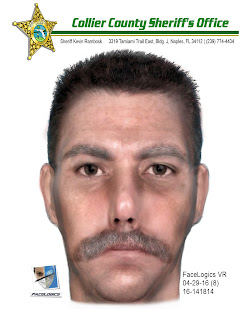 Deputies are investigating a suspicious incident involving a child in East Naples Friday evening.
The 7-year-old boy told investigators that he was skating in the parking lot of Whistlers Cove Apartments around 5:30 p.m. Friday when a man he did not know came up to him and offered him candy, then asked him to get in his vehicle.
The boy ran away and the man left the area in a black truck or van.
Detectives said the boy described the man as white, around 50 years old with brown hair and a gray mustache.
The Collier County Sheriff’s Office has released a composite image of the man based on the boy’s description.
Anyone with information is asked to contact the Collier County Sheriff’s Office at 239-252-9300, or if you wish to remain anonymous, call Crime Stoppers at 1-800-780-TIPS (8477).
Posted by colliersheriff.org at 3:00 PM