A 9-year-old girl told investigators that she was walking home from school near Thomasson and Bayshore drives when an older man riding a black bicycle kept telling her to stop.

She did not speak to the man and kept walking until she made it home safely.

Detectives said the girl described the man as white, around 50 years old with white hair and a white stubble facial hair. He was wearing green camo shorts and no shirt.

The Collier County Sheriff’s Office has released a composite image of the man based on the girl’s description. 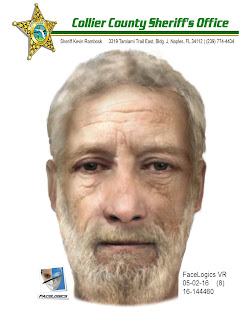 Posted by colliersheriff.org at 4:27 PM