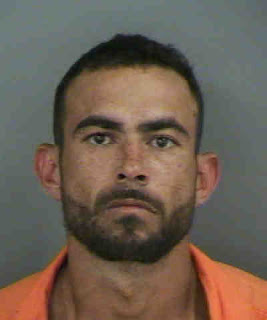 UPDATE: A 31-year-old Lee County man was arrested Tuesday and charged with firing a gun at a Collier County Sheriff’s Office K-9 deputy during a vehicle pursuit in November 2015.

Brione Lamar Joiner of Fort Myers is being held in the Collier County jail on charges of aggravated assault with a deadly weapon on a law enforcement officer, high-speed fleeing and eluding, possession of a firearm by a convicted felon and driving on a suspended license.

Detectives say the deputy, who was driving a marked CCSO sport utility vehicle, attempted to stop a blue Buick four-door sedan driven by Joiner for speeding on State Road 29 near Interstate 75. Joiner never stopped and a pursuit ensued during which he fired shots at the deputy.

Joiner eluded deputies in the Everglades City area without being positively identified.
The deputy was not injured and no bullets struck his vehicle.

The Buick was later found abandoned behind a residence on Plantation Parkway. Further investigation by deputies determined the vehicle belonged to Joiner’s girlfriend, who had reported it stolen earlier that day from the Edison Mall in Fort Myers.

During an extensive investigation, detectives determined the vehicle had not been stolen and Joiner’s girlfriend was subsequently arrested by Fort Myers police for filing a false report.

After a search of the vehicle, numerous interviews, seven search warrants and court orders, and numerous subpoenas, detectives obtained a warrant for Joiner’s arrest Tuesday and he was taken into custody without incident.

Joiner has a lengthy criminal arrest and conviction history in Collier and Lee counties, including attempted murder in 2002 when he opened fire on the Fort Myers Police Department SWAT team during a robbery.

The deputy was not injured. No bullets hit his vehicle.

Deputies were searching for the driver Friday evening.

The pursuit began shortly before 1 p.m. after the K-9 deputy, who was driving a marked CCSO sport utility vehicle, attempted to stop a newer model dark blue Buick for speeding on Interstate 75 near exit 80 and State Road 29.

Instead of stopping, the driver sped up. Deputies then engaged in a pursuit along I-75 into the Everglades City area.

During the pursuit the deputy saw the driver point a firearm out the window. The deputy believed the driver was shooting at him.

The deputy did not return fire.

The driver eluded deputies in the Everglades City area.

The vehicle was later found abandoned behind a residence on Plantation Parkway.

The vehicle had multiple dents, possibly from bullets.

Posted by colliersheriff.org at 11:24 AM