Buckle Up And Stay Alive 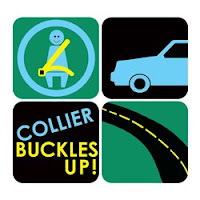 The Collier County Sheriff’s Office will join law enforcement agencies around Florida in watching drivers to make sure everyone is properly buckled up when the Click It Or Ticket seat belt campaign gets under way.

The purpose of the annual campaign is to increase safety belt use and reduce fatalities on Florida's roadways.

The campaign will kick off ahead of Memorial Day, the holiday weekend traditionally with the highest annual traffic death toll.

Deputies will be conducting various countywide heightened enforcement details and efforts to draw attention to the importance of safety restraint use.
“The proper use of a safety belt is the single most important action one can take to increase the chances of surviving a vehicle crash,” said Sgt. Chris Gonzalez of CCSO’s Traffic Safety Enforcement Bureau. “The Collier County Sheriff’s Office is asking that every driver make certain all front and back seat passengers are properly buckled up. A simple click can be the difference between life and death.”

In addition, CCSO we will be teaming up with the Florida Highway Patrol, Bonita Springs Fire & Rescue, and Safekids Worldwide to offer Collier and Lee County professionals training on child passenger safety and safety seat installation.

Collier County has the highest safety belt compliance rate – 92 percent – in the state, according to the Florida Department of Transportation.

CCSO deputies wrote fewer tickets for safety belt violations during 2008’s Click It or Ticket campaign than in 2007, proof that motorists are buckling up.

Failure to regularly use a seat belt can be deadly.

There were 1,201 fatalities due to a lack of seat belt use in Florida in 2007, the most recent year for which crash statistics are available, according to FDOT. Of those fatalities, 26 were in Collier County.
Once the campaign is over, drivers who don’t buckle up will face tougher seat belt laws.

Beginning June 30, Florida drivers can get pulled over and ticketed for failing to buckle up – as a primary offense, under a new law signed by Gov. Charlie Crist earlier this month. In the past, law enforcement officers had to have another reason to pull drivers over.

The National Highway Traffic Safety Administration estimates 142 lives will be saved by the new law every year.

* The driver and front seat passenger must wear a seat belt.
* Anyone younger than 18 must wear a seat belt no matter where they are sitting.
* Children 12 and younger should ride in the back seat for safety.
* Children from birth to 80 pounds and 4 feet 9 inches tall should ride either in a car seat or a booster seat, depending on their age.
* Getting a ticket for not wearing a seat belt will cost you $98. A ticket for a violation of child restraint violations will cost you $148.

Posted by colliersheriff.org at 8:18 AM