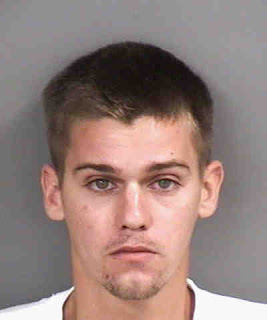 A 25-year-old man was arrested after deputies say he broke into a car a stole a purse Thursday.

According to reports, Emily Pitts of Palmetto parked her car behind the Pine Ridge Medical Group, 2330 Pine Ridge Road. She left her purse in the passenger’s side, locked the car and went into the office.

Around 10:50 a.m., a UPS driver noticed a man breaking into a red BMW and went inside the office to notify the employees. Pitts ran outside and saw Dustin E. Fisher, 25, of Lehigh Acres, leaning inside her car, reports said.

When Pitts asked Fisher what he was doing, he replied that he just saw someone break into her car and was leaning inside to see if anything had been stolen, according to reports. He then gave Pitts a fake description of a suspect, reports said.

Deputies say Pitts tried to look inside Fisher’s green pick-up as he was entering it to make sure he didn’t have the purse, but he took off.

Fisher was identified after deputies ran the truck’s tag number. Witnesses were able to identify him as the person who broke into Pitts’ car.

Fisher was charged with burglary of a vehicle and petty theft.
Posted by colliersheriff.org at 3:05 PM