CHARGES: Marijuana trafficking in excess of 25 pounds, possession of a structure used to manufacture drugs with a minor present and possession or use of narcotic paraphernalia

SUMMARY: Detectives with the Collier County Sheriff’s Office’s Vice and Narcotics Bureau arrested Velasquez and Vasquez and uncovered more than $360,000 worth of marijuana after executing a search warrant at this residence Thursday morning.

Detectives discovered the home had been converted into a marijuana grow operation consisting of two rooms and a garage. A search of these areas turned up marijuana plants and equipment used to grow marijuana including high-intensity light bulbs, power transformers, mylar, buckets, and fertilizer.

Detectives confiscated 122 plants weighing 229 pounds. The marijuana had an estimated street value of $366,000.

Velasquez and Vasquez, who live at the residence and were home when the search warrant was executed, were arrested. They were being booked into the Collier County jail late Thursday afternoon. Their arrest reports and photos will be released when they become available.

Deputies shut down 18 grow houses in Collier County in 2010. 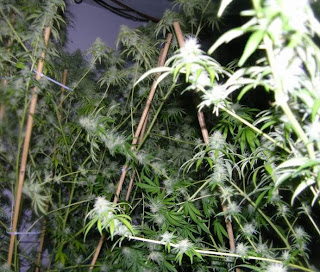 Posted by colliersheriff.org at 4:22 PM