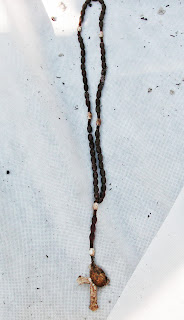 The Collier County Sheriff's Office has released photographs of a necklace found along with human skeletal remains discovered in a wooded area in North Naples on Wednesday.

Detectives hope that releasing the images will help lead to a possible identification of the dead person.

The pictures released Friday show a necklace with dark, plastic beads with a crucifix and a Christian religious medallion.

Skeletal remains were discovered in a wooded area between Livingston Road and Wal-Mart, 5420 Juliet Blvd., around 5 p.m. Wednesday.

Articles of clothing, including a shirt and a pair of pants, were also found with the remains.

The skeletal remains will be taken to the Collier County Medical Examiner's Office on Friday, where they will be analyzed. A forensic anthropologist will help determine factors such as the person's sex, age and race.

DNA from the skeletal remains will also be sent to a missing person database. 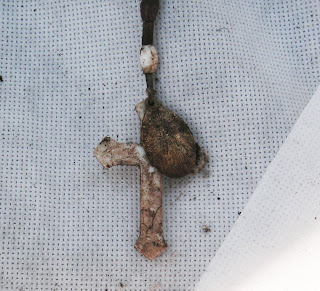 Posted by colliersheriff.org at 3:24 PM