An Ohio man who had been in Collier County for less than a week faces multiple felony charges following a series of recent vehicle break-ins at a North Naples golf course community. 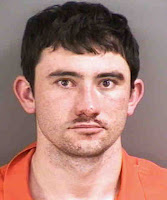 Andrew T. Wasch, 23, of Jackson, Ohio, was arrested Wednesday and charged with breaking into five vehicles parked at the Imperial Golf Course community and stealing items including an iPhone, satellite navigation systems and a firearm.

All of the vehicles were unlocked and parked in the driveways of the victims.

Around 5 a.m. Wednesday deputies responded to a report of a car burglary in the 2200 block of Imperial Golf Course Boulevard. When they arrived they found the owner of the vehicle holding the suspected burglar – Wasch – on the ground.

Deputies searched Wasch, who was wearing black clothing and gloves. When deputies searched him they found a gift card, iPhone, MP3 player with headphones, and a charger for an electronic device such as a cell phone.

Wasch told deputies that he arrived in Florida from Ohio on Feb. 11 and was staying with a relative who lived in the community on Regal Way.

Further investigation by detectives linked Wasch to at least four other vehicle break-ins in the community.

Deputies obtained permission to search the residence, where they found items reported stolen in the break-ins including a Colt semiautomatic handgun, a Garmin GPS and an Angel Trax GPS, and an iPod Nano.

Wasch was charged with multiple felony counts of unoccupied burglary, possession of burglary tools, burglary while armed, and grand theft.

Vehicle break-ins are crimes of opportunity. Many thieves pull on door handles until they find an unlocked vehicle. Thieves also tend to look through vehicle windows to see if there are any valuables inside. That’s why CCSO recommends that motorists either remove valuables from their vehicle or stow them away out of view.

Here are more ways you can keep your vehicle safe:

• Remove all valuables or keep them out of sight. This is particularly important with GPS systems, laptops and iPods. Make sure to remove all base mounts, cords and chargers from view as well.

• Remember to lock your doors even when your car is parked at home. That’s where most unlocked vehicle burglaries happen.

• If your vehicle is broken into, report it to law enforcement even if nothing significant was taken. The more information investigators have about these crimes, the more likely it is that they’ll be able to identify and stop the people committing them.
Posted by colliersheriff.org at 9:20 AM