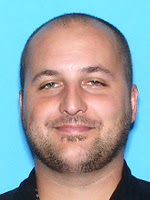 Deputies are asking for the public’s help in locating a 31-year-old East Naples man who has been missing since early Tuesday morning.

Rosenberry was last seen by deputies around 1 a.m. running out of the back of his residence at 3333 Estey Ave., Apt. #1. He was wearing a dark ball cap, camouflage jacket and dark pants.

Rosenberry is described as white, 5 feet 11 inches and 180 pounds with brown hair and hazel eyes.

Anyone with information about Rosenberry’s whereabouts is asked to call the Collier County Sheriff’s Office at 252-9300.
Posted by colliersheriff.org at 11:28 AM