A 54-year-old woman faces felony charges after deputies say she stole two pairs of designer eyeglasses from a Naples Park vision center while she waited for an elderly couple who were in her care to get their eyes examined. 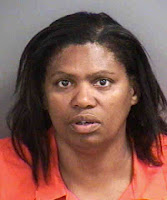 Marie Presmy also stole a large amount of cash from the couple, who live in North Naples, according to Collier County Sheriff’s Office reports said.

Presmy accompanied the couple to an eye appointment at The Fisher Eye Center, 875 105th Ave. N. on Wednesday. While Presmy waited for them, she stole a pair of Dior beige and silver frames valued at $250 and a pair of Fendi plastic tortoise shell frames also valued at $250.

The theft was confirmed on store surveillance video.

Further investigation by detectives revealed Presmy stole $850 from the couple earlier this week.

The couple’s daughter told detectives that her father had fallen at home Monday night and was taken to the hospital. She said that when her father fell he had $850 cash in one of his pants pockets and the money now was missing. She said Presmy, as her parents’ caretaker, was the only person to have access to the money

At the time of her arrest, detectives found 17 $50 bills in Presmy’s right front pants pocket. They also found the Dior eyeglasses in her purse.

Detectives also learned that there was an active local warrant for Presmy’s arrest on a violation of county probation charge from 2009. Detectives charged her on the warrant.
Posted by colliersheriff.org at 12:20 PM