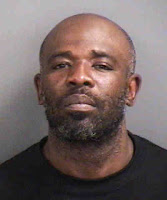 In the end, it didn’t matter what name Paul Edward Nance gave deputies Monday, he was going to jail.

Nance, 40, of West Palm Beach was arrested on three active out-of-county warrants after deputies learned his true identity, thanks to help from an electronic fingerprinting tool.

Around 5:20 p.m. Monday, deputies responded to a report of a shooting at 2692 Fountain View Circle in North Naples. The victim told deputies that a man fired gunshots inside his residence and then fled. No one was injured.

Nance told deputies he was at the residence and saw what happened.

When deputies asked Nance for identification, he said he didn’t have any on him. He proceeded to give deputies conflicting information, including several different names and dates of birth, prompting deputies to conduct a more thorough check into his real identity.

Within a few minutes the device showed a match and Nance’s true name and birthday were on display, along with his criminal history – including active warrants from the Palm Beach County Sheriff’s Office charging Nance with being a fugitive from justice in that county on charges of possession of cocaine, domestic battery and trespassing.

Deputies also pulled up Nance’s driver’s license and photo from the state Department of Motor Vehicle database to confirm his identity.

With this information, deputies placed Nance in handcuffs. While handcuffed, Nance attempted to flee and physically resisted deputies’ efforts while securing him.

In addition to the warrants, Nance was charged with giving false information to law enforcement and resisting arrest.

Nance has an extensive criminal history ranging from aggravated assaults and robberies, and was recently released from prison, sheriff’s reports said.

CCSO deputies have been using Rapid ID since 2008. The device electronically scans two fingerprint images which are then sent to the Florida Department of Law Enforcement and entered into a statewide fingerprint database. If there’s a match, that person’s criminal history and any warrants he or she may have will be delivered electronically within 45 seconds to a minute. The statewide database covers anybody who has been arrested and fingerprinted in Florida.
Posted by colliersheriff.org at 1:04 PM