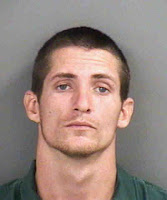 A 28-year-old career criminal was sentenced to 15 years in prison Tuesday in connection with a 2009 residential burglary in East Naples.

Marshall Franklin Jenkins was scheduled to stand trial in Collier County Circuit Court on charges of burglary of an unoccupied dwelling, grand theft, possession of cannabis less than 20 grams and possession of narcotics paraphernalia. Instead Jenkins accepted the state’s plea offer of 15 years in prison.

Circuit Judge Franklin Baker adjudicated Jenkins guilty as charged and sentenced him as a habitual felony offender to 15 years in state prison on the burglary charge. Jenkins received a five-year sentence for grand theft and was sentenced to time served on the two misdemeanor drug charges. The sentences are to be served at the same time.

According to Collier County Sheriff’s Office reports, Jenkins broke into a residence in the 600 block of Lambton Lane during the afternoon of Dec. 23, 2009. He stole approximately $425 worth of property and made his getaway on foot.

Deputies were in the area investigating another burglary when they spotted Jenkins. Deputies stopped Jenkins for questioning during which time they observed drug paraphernalia in plain view inside a bag he was carrying. Upon further inspection of the bag, deputies discovered an Apple iPod and other items.

Deputies obtained the name and address of the owner of the iPod. Deputies went to the Lambton Lane address and discovered the residence had been burglarized. They contacted the homeowner and informed him that his residence had been burglarized. They described the property found on Jenkins. The homeowner identified the property as having been stolen from his home.

Deputies placed Jenkins under arrest. A search of Jenkins turned up a small quantity of marijuana in his pocket.

Jenkins has remained at the Collier County jail on an $18,000 bond since his arrest.

Jenkins is a documented career criminal in Collier County. He was last released from state prison on Nov. 27, 2009, after completing a 20-month sentence for two counts of possession of a controlled substance. A little less than a month after his release from prison he committed the burglary for which he was sentenced Tuesday. His other prior felony convictions in Collier County include four vehicle burglaries in 2002 and a dwelling burglary in 2003.
Posted by colliersheriff.org at 11:21 AM