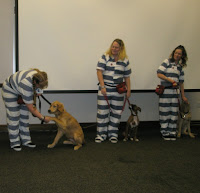 They wagged their tails instead of tossing their caps in the air, but the pride and sense of accomplishment was apparent among the first class of graduates of the Collier County Sheriff’s Office’s Second Chance Cell Dog Program on Thursday.

The class, four puppies and seven inmate trainers, received their diplomas and certificates of completion at a community ceremony attended by more than 100 people at the Professional Development Center in Naples.

The inmates and pups were partnered in the program under a first-time collaboration of the Sheriff’s Office and the Humane Society of Naples and its affiliate Southwest Florida Professional Dog Trainers Alliance.

The goal of the program is to make homeless shelter dogs disciplined, loving and faithful family pets and increase their chances of going to a forever home. At the same time it teaches inmates valuable life lessons and job skills in the areas of dog training, dog grooming and veterinary assistant skills that they will be able to use after they complete their sentences.

The four puppies in the program, three golden retrievers and one boxer, have all been adopted. The adoption process was open to the public and handled through the Humane Society.

Sheriff Kevin Rambosk lauded the great partnerships and staff who worked together to make the pilot program a terrific success.

The next class of inmates and dogs are scheduled to begin training after the holidays.

Inmate Jennifer Lehman, who, along with inmate Jeannette Welsh, trained the boxer, named Maggie, said being in the program gave her skills she will be able to use in her everyday life.

Lehman said she became more confident and learned patience working with Maggie, who required daily medication and took longer to potty train due to illness when she arrived in the program.

“Our selfish acts are what brought us to jail, and in the end loving Maggie as much as she loved us made it possible to be completely unselfish,” Lehman said. “We gave Maggie all we had every day even knowing we would have to say goodbye.”

Inmate Sarah Winters trained Chance, the golden retriever for which the cell dog program is named. She said she felt fortunate to have been able to affect a life such as Chance’s, who had such a rough start. Chance and the two other retrievers in the program, Dexter and Aimee, were rescued from a breeder in Golden Gate Estates over the summer.

“Rehabilitating these puppies has been a blessing to us girls,” Winters said.

Leo Mediavilla of the Collier County School District, taught the principles of Stephen Covey’s “Seven Habits of Highly Effective People” to the inmates during the program. As the first group, these inmates set the bar for the program, he said.

“When you’re the first group you’re the legacy leaders, you’re the ones who will leave a footprint along the way, and you’ve done an amazing job,” Mediavilla told the inmates. 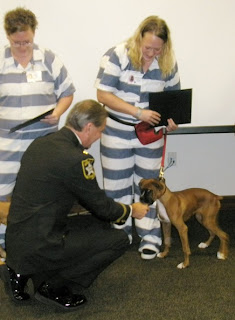 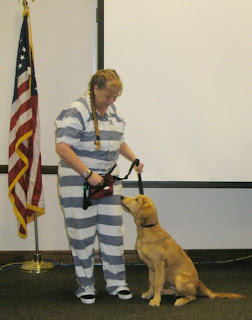 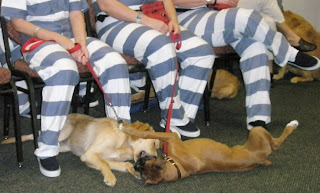 Aimee and Maggie play during the ceremony. 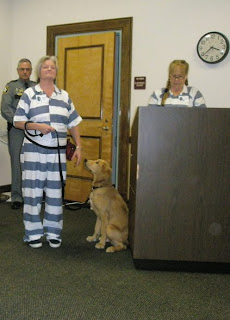 ﻿
Posted by colliersheriff.org at 1:12 PM