Collier County Sheriff’s Office detectives have determined that an abandoned rental car found Sunday afternoon in Kirby Storter Roadside Park in Ochopee has ties to a man wanted for murder in Louisiana.

Alan Virgil Brumfield, 48, is wanted for first-degree murder in connection with an Oct. 13 home invasion and shooting in Natchitoches Parish, La.

Brumfield is described as white, about 5 feet 10 inches tall and 150 pounds with partially gray hair and hazel eyes.

The license plate had been removed from the blue Nissan Sentra, but deputies determined that the vehicle identification number (VIN) came back to one last believed to be in Brumfield’s possession.

Deputies searched the area from the ground and the air and determined that Brumfield was not in the vicinity.

Anyone with information on Brumfield’s whereabouts is asked to call their local law enforcement agency or the Natchitoches Parish Sheriff’s Office at 318-352-6432. 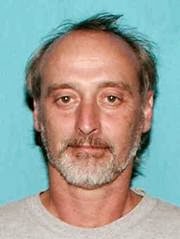 Posted by colliersheriff.org at 11:37 AM