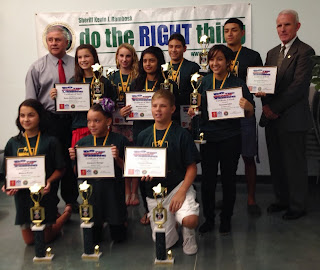 Nine Collier County students were recently recognized for good deeds ranging from helping a distraught friend to saving a stranger from drowning.

The students were recognized at the first “Do The Right Thing” award ceremony for the 2013-14 school year at Lorenzo Walker Institute of Technology on Monday, Oct. 7.

The Collier County Sheriff's Office adopted the "Do the Right Thing" program in January 1988, and has honored hundreds of children for acts that reinforce good behavior, positive acts, and outstanding accomplishments in the community.

The following students have been recognized for October:

Carmela was at the Immokalee Sports Complex pool area when she observed a young child going down the slide into the water. Carmela noticed the boy was struggling so she jumped into the pool to save the boy and pull him to safety.

Cooper noticed another student writing statements on her notebook about wanting to harm herself and quickly notified a school staff member. The student’s parents were notified and she now receives counseling and is grateful for Cooper’s concern.

One night Bianca and Torie were texting with a friend who was making comments about harming herself. They both told their parents, who immediately contacted CCSO and Project Help. Bianca and Torie also assisted by providing details about their friend’s comments and location. The friend was located in safe condition and received immediate care.

Sierrah and Vanessa reported to school staff they saw a student with a gun on campus. Deputies made contact with the student and determined the weapon was a BB gun.

Angelina was in the school parking lot when she noticed two girls coming out of a side door of the building. It seemed out of place to see anyone leaving from that door so she made a mental note of the time and physical description of the girls.

It was discovered the following day several items were stolen from the girls’ locker room. Angelina approached deputies with her information, which led to the identity and arrest of two Naples High students for the thefts.

Ezequiel Rosales and Frank Torres were at a North Naples beach when they noticed their younger cousin get caught in an undertow. Torres went into the water to rescue his cousin but also got swept in the undertow. Rosales was able to pull both boys out of the water.

ABOVE: Photo by Cpl. Efrain Hernandez/CCSO
Posted by colliersheriff.org at 4:20 PM