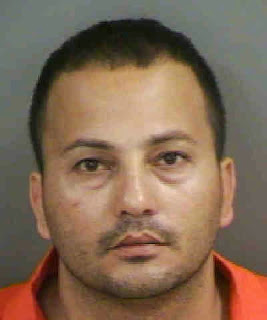 A Texas man faces human smuggling charges after deputies stopped his SUV in East Naples and discovered five suspected illegal immigrants, including two teenagers, inside the vehicle over the weekend.

Iniael Rodriguez, 35, of Houston, was arrested Friday night and booked into the Collier County jail on five counts of human smuggling. The victims range in age from 16 to 34.

Rodriguez also faces one felony count of kidnapping after deputies determined he forcibly held a 17-year-old passenger against his will.

Around 9 p.m. Friday the Sarasota County Sheriff’s Office issued a BOLO about a possible kidnapping suspect who may be driving a white sport utility vehicle in the area of the 101 mile marker of Interstate 75 in Collier County. A Collier County Sheriff’s Office deputy located a 2004 white Buick SUV matching the description of the suspect vehicle parked at the BP gas station, 8901 Davis Blvd. The vehicle had six occupants, with Rodriguez in the driver’s seat.

Earlier that evening Sarasota sheriff’s investigators had responded to a report of a possible kidnapping in that county. A man told investigators that he had paid a “coyote” $950 to smuggle his 17-year-old son into the United States from Guatemala.  He was supposed to meet the coyote at a gas station in Sarasota County on Friday to take custody of his son.

When the father arrived at the gas station he saw his son in a white SUV with Rodriguez driving. Rodriguez got out of the vehicle, but his son did not. Rodriguez demanded the father pay him another $950 or he would not give him his son. The father said he did not have the money and pleaded for his son. Rodriguez got back in the vehicle and sped away without releasing the boy.

When Collier deputies made contact with Rodriguez, the 17-year-old boy was among the five passengers in the SUV. The boy told deputies that his family paid for him to be brought into the United States from Guatemala to be reunited with his father after nine years apart. The boy said he was in Houston when he was put in a vehicle driven by Rodriguez and brought to a gas station in Sarasota to be released to his father.

The four other passengers in the vehicle - a 16-year-old boy, a 29-year-old woman, a 24-year-old woman and a 34-year-old woman - confirmed they paid a coyote to bring them into the United States and that Rodriguez was part of the group of individuals responsible for their transport to Collier County. They said Rodriguez knew they were illegal and that he was bringing them secretly to this country.


Posted by colliersheriff.org at 2:01 PM