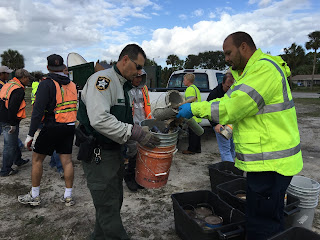 Cpl. Rob Capizzi is fighting crime by literally cleaning up the streets.

Cpl. Capizzi has helped organize more than 50 community cleanups, abandoned property sweeps and beautification projects as part of his duties as a certified law enforcement officer for the Collier County Sheriff’s Office.

Cpl. Capizzi was named 2016 Law Enforcement Officer of the Year during the Keep America Beautiful national conference at the Hilton Orlando in Lake Buena Vista on Monday, Feb. 1.

“I am ecstatic and honored to be recognized nationally,” said Cpl. Capizzi. “It is a very rewarding feeling to be acknowledged by the community that I serve and support.”

Founded in 1953, KAB is a national nonprofit organization that wants every community to be a clean, green and beautiful place to live. It has also been the driving force in many timeless ad campaigns to educate the public on how to improve and beautify their surrounding environments. At the national conference the group gives special recognition to law enforcement professionals and other individuals who have demonstrated an outstanding commitment to community service in their approaches to enforcement of environmental laws and regulations.

After joining the Community Oriented Policing (COPS) Unit in 2003, he saw the need to educate and instill pride among Golden Gate residents and became instrumental in the formation of the Golden Gate Task Force – an innovative partnership made up of government agencies, local organizations, civic associations and Golden Gate residents. All of these groups work together with a common goal to focus on dilapidated neighborhoods, homes and properties through land, canal and alleyway cleanups, graffiti abatement and litter prevention.

One of Cpl. Capizzi’s most memorable cleanups was in 2010.

“We collected over 40,000 pounds (approximately 20 tons) of trash and debris all within a four-hour timeframe,” he said. “The results were so successful the Board of County Commissioners of Collier County even proclaimed April 13, 2010, as the Golden Gate Task Force Day.’’

Whether an effort collected less than a ton or 20 tons of trash/debris/hazardous material, the task force continues to be successful with increasing community involvement and property values and improving the quality of public access areas, while reducing blight which can attract crime.

Cpl. Capizzi will continue to serve as chairman of the task force.

ABOVE: Photo by Media Relations Specialist Kristi Lester/CCSO
Posted by colliersheriff.org at 11:52 AM