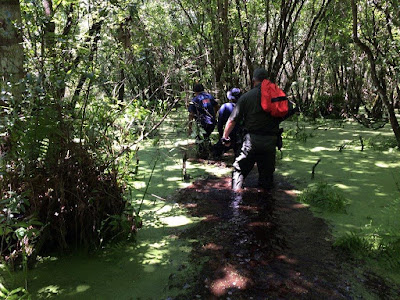 Multiple public safety agencies worked for more than five hours Thursday to render aid to a 34-year-old man who had suffered a medical episode in a remote and swampy area of Pepper Ranch Preserve in Immokalee.

The call for medical assistance was received by Collier County Sheriff’s Office dispatchers at 9:57 a.m. The caller advised that the patient had a previously diagnosed heart condition and was experiencing dizziness and shortness of breath. The caller said that he and the patient were part of a group of people who were in the preserve collecting water samples for the University of Florida.

First responders on the ground drove as close as possible, but were forced to trudge on foot through two miles of swamps and dense vegetation to reach the patient. A helicopter with CCSO’s Aviation Unit hovered above and helped guide them to his location. Rescuers’ progress was slowed by logs, tree stumps and holes that were hidden beneath the water’s surface. Throughout the trek they kept watch for alligators, snakes and poisonous spiders. At one point during the journey a deputy had to kill an approaching water moccasin with a machete.

Once rescuers arrived on scene around noon, they recognized that the terrain was too treacherous to carry the patient the two miles back to safety. They decided to call Miami-Dade Fire Rescue to respond with a helicopter equipped for an air rescue. They remained with the patient until the helicopter arrived shortly after 2 p.m. Once the patient had been safely lifted aboard the helicopter to be transported to Lee Memorial Hospital in Fort Myers they began the slow two-mile slog back to their vehicles.

Click here to watch a video of the rescue. 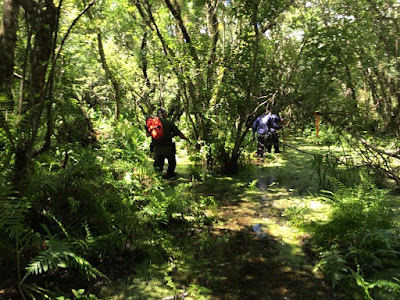 Video and photos submitted by Cpl. Jack Hazel/CCSO(2)
Posted by colliersheriff.org at 12:15 PM