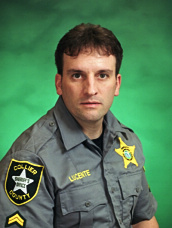 A memorial service will be held Friday, June 10, for Collier County Sheriff’s Office Corrections Cpl. Mark Lucente, who was killed in a vehicle crash May 26.

The community is invited to attend the 11 a.m. service at New Hope Ministries, 7675 Davis Blvd. in East Naples.

Cpl. Lucente, 48, died in a crash on Interstate 75 near the Daniels Parkway exit while on his way to work.

A funeral service and burial were held in Cpl. Lucente’s hometown of Dayton, Ohio, on June 3.

His family has planned a memorial service in Collier County with the community in mind. CCSO has been overwhelmed with support and condolences from the community since Cpl. Lucente’s death.

“His family wanted to do something for Mark’s co-workers and the community so they could say goodbye and to honor him,” said Angela Larson, CCSO Victim Services Supervisor.

Cpl. Lucente was a veteran of the U.S. Army. He began his career with CCSO in August 1999 as a Corrections deputy trainee. He was promoted to deputy in December 1999 upon completion of training at the Southwest Florida Criminal Justice Academy. He was promoted to corporal and assigned to the Naples Jail Center in 2001.
Posted by colliersheriff.org at 11:23 AM