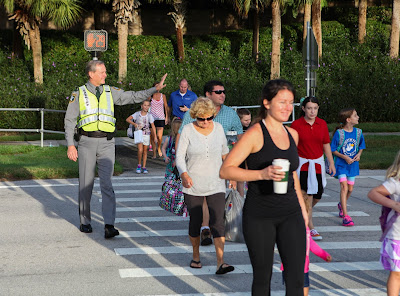 Look for lighted marquee message boards around Collier County, reminding the community that the first day of school is Monday, Aug. 15.

Message boards can be seen at the following intersections:

The intent of the countdown is to remind the community that the start of the school year is a week away. Traffic will be more congested around schools and students will be walking and riding bicycles along the roadways. And school speed zones will be back in operation.

The goal of the countdown is to educate the community on ways to change driving behavior in order to reduce serious bodily injury and fatal crashes involving youth and the general public.

The countdown is also a way to remind schoolchildren that they need to think about their own safety, whether they’re on the bus, on the sidewalk, at school, or with friends.

Also during the first week of school deputies in marked patrol vehicles and in unmarked vehicles with their emergency lights flashing will be parked at school speed zones.

Deputies will also be at crossing guard intersections and other areas where large groups of students walk to and from school.

ABOVE: Photo by Cpl. Efrain Hernandez/CCSO
Posted by colliersheriff.org at 8:30 AM