UPDATE: The Collier County Sheriff’s Office has released a brief video of Jamie Curtis, who has been missing since Friday night.

Anyone with information on his location is asked to call the Collier County Sheriff’s Office at 239.252.9300.

While the physical search for 27-year-old Jamie Curtis of Golden Gate has been suspended, detectives are following up on leads and this remains an active investigation.
Detectives have not ruled out the possibility that Curtis is no longer in the area where he went missing Friday evening and may be elsewhere in the community.


Curtis, who has Asperger Syndrome, went missing around 8:30 p.m. Friday near Immokalee Road and Jones Mining Road in Golden Gate Estates after behaving in a paranoid manner and asking his mother to pull over. When she stopped the car he got out and fled into a swampy, heavily wooded area. Collier County Sheriff’s Office deputies searched over the weekend by air, on foot, and on swamp buggies and ATVs. CCSO’s K-9 Unit and Dive Team also searched. The Florida Fish and Wildlife Conservation Commission, Collier County Emergency Management and local fire departments provided additional personnel and equipment. 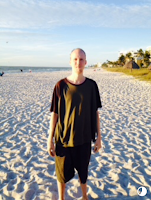 Curtis is 6-feet 1-inch tall with blond hair and green eyes. He was wearing black sweatpants and a blue shirt and was carrying a camouflage backpack.

Anyone with information on his location is asked to call the Collier County Sheriff’s Office at 239.252.9300.
Posted by colliersheriff.org at 2:51 PM