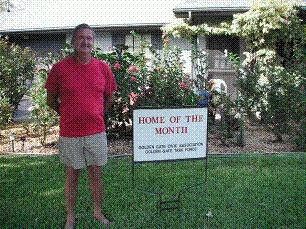 This program started in April 2007 by the Golden Gate Task Force to recognize Golden Gate residents who take pride in their homes and encourage others to improve their properties as well.

The Task Force is made up of Golden Gate residents, community leaders and representatives of several Collier County government agencies including CCSO. Its main purpose is to educate residents on code standards.

“Most of the nominations are gathered by our very own Community Observers who patrol the area and members of the Task Force,” said Cpl. Robert Capizzi. “To get nominated the home must be maintained to county standards, have a well groomed lawn and aesthetically pleasing landscape.”

Martel has lived in Naples for 45 years and has spent 18 of them in his Golden Gate home. He takes pride in his home’s appearance and has an impressive rose garden.

As a winner, Martel received a $50 gift certificate from Sunshine Ace Hardware, displayed a ‘Home of the Month’ sign on his lawn for the month and was recognized for his efforts in an article in the Collier Citizen.
Posted by colliersheriff.org at 9:00 AM