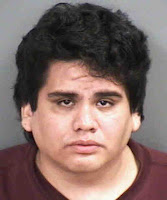 An undercover Collier County Sheriff’s Office investigation led to the arrest Tuesday of a 24-year-old East Naples man on 500 counts of child pornography.

The arrest of Daniel Enrique Guevara Vilca, 737 Landover Court, #202, represents the most number of initial charges ever brought by CCSO against one person in a child pornography investigation in Collier County.

The investigation continues and additional charges are expected.

Sheriff Kevin J. Rambosk applauded the investigative work of detectives that helped lead to this arrest.

“This investigation is an example of the Collier County Sheriff’s Office’s proactive approach to crimes against children,” said Sheriff Rambosk. “Our message to those who take part in this kind of activity is that we are looking for you and we will find you. We are dedicated to keeping our community safe.”

In December 2009 detectives with CCSO’s Major Crimes Bureau Exploitation Unit began an undercover investigation in an attempt to identify persons using online file-sharing networks on the Internet to download and share child pornography.

Through the investigation, detectives tracked child pornography files that were shared over the Internet to the Internet Protocol, or IP, address, on Guevara Vilca’s computer.

On Thursday, detectives executed a search warrant at Guevara Vilca’s residence. An initial forensic analysis of the computer turned up hundreds of images of child pornography that detectives said were obtained from an online file-sharing network.

Some of the videos and pictures showed boys ages 6 to 12 engaged in sexual activity with adults and each other, according to arrest reports.

Detectives also seized two other computers that were inside the residence. Forensic analyses will be performed on those computers as part of the investigation.
Posted by colliersheriff.org at 4:09 PM