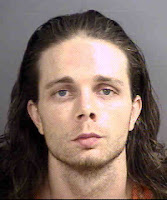 Collier County Sheriff’s Office detectives arrested a man Friday who they believe is responsible for an armed robbery in North Naples in 2009.

A tip led detectives to suspect William Alan Ringer after the case was featured in a CCSO story and video published on the “Cold Case” page of the sheriff’s website, www.colliersheriff.org, in May 2011.

Since 2010, CCSO has been profiling unsolved crimes in an effort to renew public interest and generate tips and leads. This marks the first time an arrest has been made in one of these cases.

Ringer, 27, 1461 21st St. S.W., Golden Gate, was arrested late Friday afternoon and charged with armed robbery with a firearm and petty theft in connection with the Sept. 11, 2009, incident at The Strand shopping plaza in North Naples. He was arrested at the Collier County Jail, where he has been held since Aug. 26, 2011, on unrelated charges, including grand theft auto.

CCSO reports gave this account of the 2009 armed robbery at The Strand plaza:

Amy Jo Vaughan told detectives she was robbed at gunpoint while reading a book in her vehicle on her lunch break. She was parked in the lot outside Publix when a man approached her slightly open window and pointed a silver handgun at her.

“Ma’am, gimme all the money in your wallet,” the man demanded.

Vaughan, fearing for her safety, reached into her wallet and handed the man all of the money she had: two $1 bills.

Without saying another word, the man fled on foot north toward Strand Boulevard.

Detective Kristine Huff said she and deputies interviewed several witnesses who saw the robber in the shopping plaza and provided a description. Surveillance video shows a man matching the description of the robber at several businesses around the time of the robbery.

Witnesses described the robber as white, in his early 20s, about 5 feet 6 inches, 130 pounds with black hair and acne on his face. He was wearing black gloves, a lightweight black jacket, black shoes, a T-shirt, and a red Super Bowl cap.

During her investigation, Detective Huff discovered that shortly after the robbery, the suspect entered the Subway restaurant in the shopping plaza and ordered a pizza. He was still wearing black gloves, a black jacket and red cap. The store’s video surveillance captured the scene.

The suspect went to the restroom. When he came out he told the cashier he didn’t have any money to pay for the pizza. He left Subway and headed over to an Italian restaurant next door, where he attempted to order a pizza but then told the cashier he forgot his wallet.

He then went to the Supercuts salon, where an employee advised there was a 30-minute wait for a haircut. He told the employee he would return later and left the shop.

Another witness told detectives that suspect got into the passenger seat of a 1984 black Corvette and left the plaza.

Video surveillance images from Subway were shown to Vaughan, who identified the man in the video as the person who robbed her at gunpoint.

On May 20, 2011, CCSO featured the case in a story and video on its website in an effort to generate tips and leads. As a result, Detective Huff received a tip identifying Ringer as a possible suspect.

Detective Huff subsequently revisited witnesses, several of whom identified Ringer from a photo lineup as being in the plaza around the time of the robbery, dressed similarly as the suspect and exhibiting suspicious behavior.

Due to the totality of the circumstances, to include multiple eyewitnesses’ positive identification of Ringer, video surveillance capturing Ringer’s image at the Subway around the time of the robbery and a vehicle that was seen leaving the area that was linked to a close associate of his, Ringer was placed under arrest, according to the arrest report.

Click here to watch the CCSO “Cold Case” video about this case.
Posted by colliersheriff.org at 4:43 PM