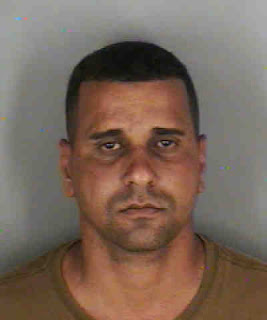 A Hialeah man was arrested after deputies say he broke into a home and stole a microwave Tuesday afternoon.

CCSO received reports that a man was seen exiting his BMW sport utility vehicle and walking to the rear entrance of a vacant home located at 3865 18th Avenue N.E, Golden Gate Estates. The man came out of the house carrying a microwave oven, placed it into his SUV and drove off.

Deputies searched the outside of the home and discovered it had been broken into and that the air-conditioning unit had also been cut loose from its copper refrigerant and electrical lines.

Deputies spotted the BMW parked in front of another vacant home at 3331 26th Avenue S.E. and spoke with the driver Gerardo Martinez-Reygada, 39.

The microwave oven, a yellow crow bar, a pair of brown leather suede gloves, a set of yellow bolt cutters, a screwdriver and hand wrench were found inside his SUV, reports say.

Deputies say Martinez-Reygada also had two copper high and low pressure caps that had been removed from an air-conditioning unit.

He was charged with burglary, loitering, possession of burglary tools, driving with a suspended license and grand theft.
Posted by colliersheriff.org at 12:04 PM