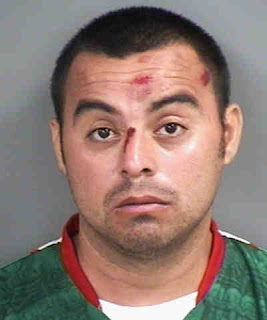 A Naples man was arrested after deputies say he left the scene of several accidents while driving under the influence Monday night.

CCSO was contacted after a man driving a white Honda left an accident at Livingston and Immokalee roads around 8:54 p.m. and continued to drive east on Immokalee. According to reports, two other cars were also hit by the Honda until the driver began heading south on I-75.

Deputies pulled over Jose Manuel Lopez-Mendoza, 29, 1089 Trail Terrace Drive Unit A, at the 105 mile marker. Reports say he refused to cooperate with deputies when they asked him several times to exit his vehicle.

Deputies later determined that Lopez-Mendoza had been involved in another hit and run at U.S. 41 North and Pine Ridge Road around 8:30 p.m. They also learned that his driver’s license expired in 2006.

Lopez-Mendoza was charged with DUI, DUI with damage to property or person, leaving the scene of a crash, driving with an expired license, resisting a law enforcement officer without violence and hit and run.
Posted by colliersheriff.org at 2:07 PM