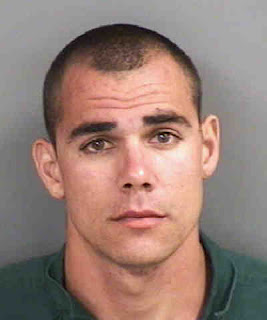 A Golden Gate man was arrested after deputies say he refused to pull over for a traffic stop when he was seen making an illegal U-turn Wednesday night.

Deputies spotted a motorcycling driving more than 100 mph while they were investigating an accident in the northbound lanes of Livingston Road near Marsala Way around 8:06 p.m. The motorcycle then made an illegal U-turn at the Marsala Way median, ignored a deputy’s verbal commands to stop, and took off southbound on Livingston Road, according to reports.

Reports say the driver, Raybel Pena, 24, 2212 Sunshine Blvd. Unit B, took off again after deputies located him in the parking lot of the Collections of Vanderbilt shopping plaza at the intersection of Airport-Pulling and Vanderbilt Beach roads.

Pena then exited at the 105 mile marker, where Golden Gate deputies stopped him while he was at a red light at Santa Barbara Boulevard and Coronado Parkway.

Pena was charged with fleeing/eluding and reckless driving.
Posted by colliersheriff.org at 10:56 AM