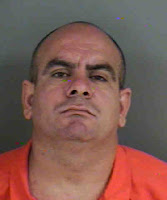 UPDATE: A second arrest has been made in connection with one of the largest pot production busts in Collier County Sheriff’s Office history last year.

Lenrry Cordero-Becerra, 37, 3475 Golden Gate Blvd., Golden Gate Estates, was arrested Thursday in connection with the Sept. 15, 2010, marijuana grow house bust at 985 Honeybee Drive in the Estates, which turned up $1.27 million in pot.

He is charged with trafficking marijuana and possession of narcotic paraphernalia.

Deputies confiscated a total of 424 marijuana plants weighing 66.70 pounds with an estimated street value of $1.27 million from the two-story residence at 985 Honeybee Drive.

Lazaro Cordero-Becerra, 46, who lives at the residence, was arrested and charged with trafficking in marijuana and possession of narcotic paraphernalia.

Detectives from CCSO’s Vice and Narcotics Bureau, along with SWAT members, executed a search warrant at the residence around 7 a.m.

Detectives discovered an indoor marijuana grow operation on the first floor of the residence. The search turned up 116 plants and equipment used to grow marijuana, including high-intensity light bulbs, fertilizer, power transformers, and buckets. They also found an electrical panel that controlled the lights and timers that controlled the electricity being diverted for the operation.

A second marijuana grow operation was discovered inside a travel camper parked in back of the residence. Detectives discovered 308 plants inside the camper, along with high-intensity light bulbs, pots, fertilizer, power transformers and other equipment used to grow marijuana.

The camper was designed as a nursery for small marijuana plants, detectives said.

The indoor grow equipment had an estimated value of $20,000.

Cordero-Becerra was at the residence when the search warrant was executed, detectives said. He was previously arrested on a charge of marijuana trafficking by the Miami-Dade Police Department in 2008.

Cordero-Becerra was being booked into the Collier County jail Wednesday afternoon.
Posted by colliersheriff.org at 12:51 PM