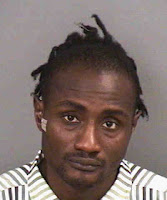 A Golden Gate Estates man convicted of pawning a stolen computer for $150 has been sentenced to state prison.


Terrick Maurice Crosby, 34, 3665 24th Ave. S.E., was sentenced Wednesday to 25 years in prison by Circuit Judge Frank Baker, receiving the longest sentence ever handed down in Collier County for dealing in stolen property.

A jury convicted Crosby of dealing in stolen property and giving false information to a pawnbroker, both felonies, after a two-day trial in December 2010. Crosby chose to represent himself at trial.

At a hearing Wednesday, Judge Baker adjudicated Crosby guilty as charged and sentenced him as a habitual felony offender to 25 years in prison on the dealing in stolen property charge and to five years for giving false information. Both sentences are to be served at the same time. Because of the habitual offender designation, the judge could have sentenced Crosby to a maximum of 30 years in prison.

According to Collier County Sheriff’s Office reports, a Dell laptop computer was stolen from the library at Hodges University in Golden Gate on Sept. 15, 2009. The theft was reported to CCSO the following day.

Further investigation by CCSO detectives found that the stolen computer had been pawned at a shop in Golden Gate the same day the theft occurred. Crosby’s name was on the pawn ticket. A store clerk identified Crosby as the person who pawned the computer in exchange for $150. Independent witnesses put Crosby, who was not a student at the university, at the library the day of the theft.

Crosby was arrested Sept. 30, 2010, at the Collier County jail, where he was being held on unrelated charges. He has remained in jail since his arrest.

Crosby is a documented career criminal in Collier County. Crosby has an extensive criminal history in Miami-Dade County, where he once lived. His felony convictions in that county date back to 1994 and include robbery, grand theft, burglary and resisting arrest with violence. He was last released from state prison on Nov. 20, 2006.
Posted by colliersheriff.org at 1:37 PM