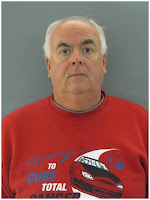 A Golden Gate Estates man was arrested Thursday afternoon in connection with the molestation of a student at Highlands Elementary School in Immokalee where he was a volunteer.

Robert G. Alter, 60, 1025 Port Orange Way in the Waterways community, was charged with four counts of lewd and lascivious molestation on a victim under the age of 12. Charlotte County Sheriff’s Office deputies working as members of the U.S. Marshals Service Task Force arrested Alter in Charlotte County. He is awaiting transfer to the Collier County jail.

The investigation began Jan. 13 after the Collier County Sheriff’s Office received information that a student was being sexually abused in the school by a volunteer. Detectives with CCSO’s Special Victims Unit recovered evidence that supported the allegation. The investigation was presented to the State Attorney’s Office, which approved the arrest warrant.

The investigation is continuing to determine whether there are additional victims. Alter was also a volunteer at Pinecrest Elementary School in Immokalee.

If anyone has information on this case they are asked to call the Collier County Sheriff’s Office at 239.252.9300 or to remain anonymous and be eligible for a reward call Crime Stoppers at 1.800.780.8477.
Posted by colliersheriff.org at 3:47 PM