The Collier County jail is the first county jail in Florida to have a whole body security scanner.

RadPRO SecurPASS made its debut at the jail at 7 a.m. Wednesday.

The Collier County Sheriff’s Office is deploying the high-tech body scanner, saying that it will detect contraband coming into and circulating in the jail. CCSO is a pilot program for Southwest Florida.

The scanners will ensure deputies can safely and easily find weapons like guns and knives as well as other contraband such as cell phones and illegal and prescription drugs that inmates might be carrying. The SecurPASS will detect all metallic, non-metallic, organic or inorganic contraband.

“This scanner is a new technology that not only improves safety for officers and inmates alike, it saves money by making the search process far more efficient,” said Sheriff Kevin J. Rambosk.

The scanner is much less intrusive than the comparable strip search procedure being used by the jail today. A strip search typically takes 15 minutes, compared to a scan, which is about 7 seconds.

The scanner is being used on all inmates housed in the jail. About 25 new inmates are booked into the jail every day.

“The importance of an effective and thorough search cannot be stressed enough,” said jail Captain Beth Richards. “In a potentially volatile environment like the jail, an unarmed deputy must rely on stringent security and search procedures to ensure a secure and safe environment for both the inmates and staff.”

The SecurPASS scanner is a virtual body scan that allows detection of contraband both externally and internally without requiring the inmate to disrobe.

The scanner will also detect contraband in shoes, mattresses, body orifices and any other object.

CCSO’s system is unlike the current scanners deployed by the federal government at airports around the country that utilize surface rendering technology, said Dennis Wolfe of Virtual Imaging Inc., the Deerfield Beach-based subsidiary of Canon U.S.A., which manufactures the RadPRO SecurPASS.

Also unlike airport scanners, CCSO’s scanner ensures that the inmate’s privacy is protected because it does not show a person’s anatomical outline or facial features.

“This is leading edge technology for contraband detection because you can’t hide anything from it,” Wolfe said.

One by one inmates step barefoot onto a platform that moves them through an imaging portal, where they are instructed to hold their shoes at their sides, and look down.

A Transmission Image is created and processed onto a computer screen, where it is reviewed by a deputy who has been trained and certified to operate the system.

Each scan involves a very highly filtered imaging beam that is well below federal guidelines. Jail officials likened the imaging procedure to about 30 minutes in the Florida sun or 3 minutes during a commercial flight.

An inmate would have to be imaged 400 times on the SecurPASS to equal one chest X-ray or dental X-ray series. 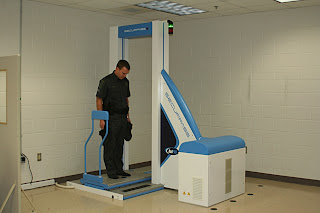 A jail deputy demonstrates Friday how inmates are scanned at the jail. Photos by Collier County Sheriff's Office (2) 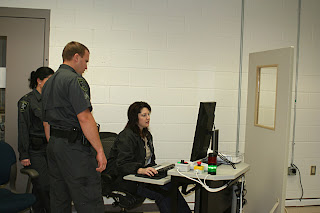 During the scanning process a transmission image is created and displayed onto a computer screen, where it is reviewed by a deputy who is trained and certified to operate the system.
Posted by colliersheriff.org at 9:00 AM