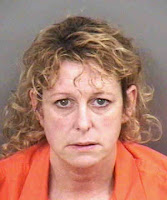 A Michigan woman was sentenced Wednesday to three years in prison after reaching a plea agreement on charges of lewd and lascivious battery and 17 counts of providing obscene material to minors.

The Collier County Sheriff’s Office received reports in October 2008 that Creger had engaged in sexual activity with a teenage victim in Michigan and Florida. Investigators say she also sent multiple explicit images to the victim. Warrants were issued for Creger’s arrest and she was booked into the Collier County jail in December 2009.

Investigators subsequently charged Creger in November 2010 for obstruction of justice for attempting to convince the victim to change his court testimony. Prosecution of this additional charge is pending.
Posted by colliersheriff.org at 11:16 AM