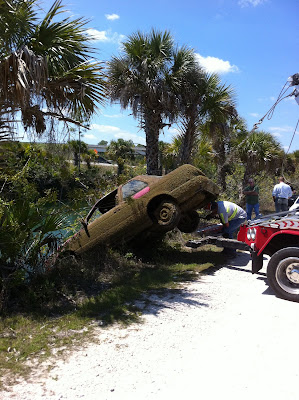 Members of the CCSO dive team and Auto Theft Unit participated in the vehicle recovery operation at the Crystal Lake Canal, along Interstate 75 east of Everglades Boulevard.

Representatives from the National Insurance Crime Bureau and GEICO, State Farm and Infinity insurance companies were also present during the operation.

Operations like the one Thursday in which multiple vehicles were recovered are possible during the winter months when the water levels in area canals are low and submerged vehicles are recognizable by air. CCSO’s Aviation Unit located all of the vehicles.
Posted by colliersheriff.org at 4:49 PM