A 42-year-old Golden Gate man was arrested Tuesday after deputies found images and videos of child pornography on his home computer. 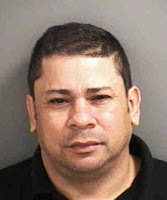 The Collier County Sheriff’s Office launched an investigation after receiving a cybertip from the National Center For Missing and Exploited Children.

According to the tip, the Broward County Sheriff’s Office had identified an Internet Protocol address suspected of posting child pornography to a Google Groups site. The pornography contained male children under the age of 12 engaged in sex acts with adults and alone.

Further investigation by a detective with CCSO’s Major Crimes Bureau Exploitation Unit traced the IP address back to Marin-Rios.

CCSO detectives executed a search warrant at Marin-Rios’ residence Tuesday morning. A preliminary forensic analysis of Marin-Rios’ home computer turned up 30 pictures and video files of pre-pubescent boys involved in sex acts with each other or alone.

Marin-Rios was placed under arrest.

An investigation continues.
Posted by colliersheriff.org at 4:08 PM