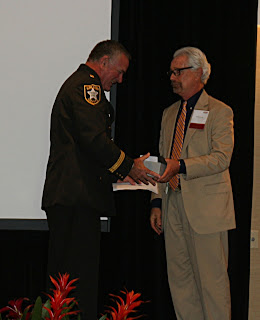 Collier County Sheriff’s Office Chief of Corrections Scott Salley was honored Thursday in Naples for his extensive role over the years in the prevention and treatment of addiction.

“The work Chief Salley has done in the community is just outstanding,” the Hazelden organization said in a statement. “He was far and away the winner.”

Chief Salley works closely with local agencies and organizations including Hazelden, the David Lawrence Center and St. Matthew’s House. He is the current president of the Drug Free Collier initiative, which seeks to prevent and reduce juvenile substance abuse in Collier County.

Chief Salley said he is humbled by the award. He said he’s just doing what is expected of him as a servant of the community.

“Many of the people that I have interacted with probably don’t even remember my name – just that I am the ‘Jail guy,’” Chief Salley said.

In addition to its Naples location, Hazelden has facilities in Minnesota,where the organization is based; Oregon; Illinois; and New York.

Photo by Natalie Felber/CCSO
Posted by colliersheriff.org at 4:07 PM