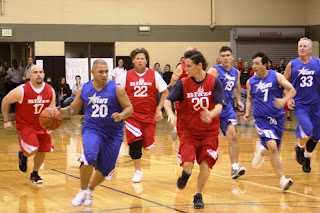 The Collier County Sheriff’s Office joined forces with the North Naples Fire Department in a basketball game to raise money for local youth programs during the inaugural Hoops and Heroes event April 1.

Sponsored by the Police Activities League, the CCSO Stars faced off against the NNFD Blaze at the North Naples Regional Park gymnasium, where the bleachers were filled with cheering fans.

CCSO would like to give special thanks to community partners Collier County Parks and Recreation, McDonald’s, OK Koral Marketing, and Tamiami Ford/Hyundai/Mitsubishi for their support.

ABOVE: Cpl. Jason Velazquez runs the ball down the court, while Cmdr. Michael Williams, Sgt. Thomas Wedlock and Cpl. Marshall guard the Blaze. 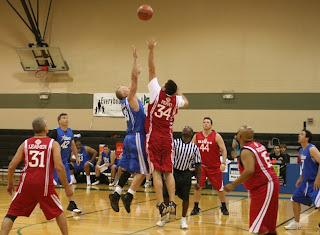 Cpl. Douglas Marshall starts off the game by trying to swipe the ball from the Blaze. 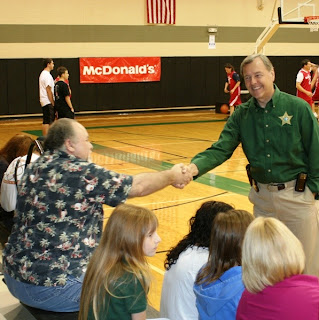 Sheriff Kevin J. Rambosk met with spectators who came out to support the effort to raise money for local youth programs.

Photos by Kristi Lester/CCSO(2)
Posted by colliersheriff.org at 12:26 PM