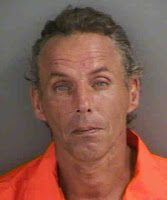 Kevin Caldwell, 900 E. Coconut Circle, is charged with armed robbery with a firearm and aggravated assault with a deadly weapon.

Early on in the investigation a CCSO deputy identified Caldwell as a suspect based on store surveillance images from the robbery, according to the arrest report. The deputy had made contact with Caldwell during a disturbance the night before the robbery.

Detectives located Caldwell in the area of Estey Avenue and Guava Drive in East Naples on Tuesday. Detectives questioned him about the robbery and he denied any involvement in it, the arrest report said.

Caldwell gave detectives permission to search the room he rents on Coconut Circle East. Detectives showed Caldwell’s landlord surveillance photos from the robbery. The landlord identified the robber as Caldwell, his tenant. He also told detectives that the hat the robber wore was the same hat he’d seen Caldwell wear in the past. 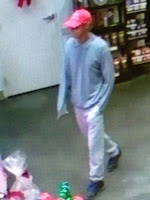 According to CCSO reports, the man displayed a gun to an employee behind the counter and demanded cash. He received an undisclosed amount of cash and left the store.
Detectives have released surveillance images of the suspect in the hope that someone will recognize him and contact the Sheriff’s Office with information.

The suspect is described as white, about 5 feet 9 inches tall and 160 pounds with a slim build and gray hair. He was wearing a long-sleeved gray shirt, gray sweat pants, a red ball cap and sunglasses.

Posted by colliersheriff.org at 10:50 AM