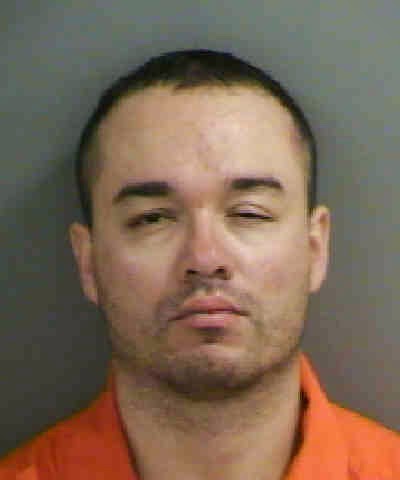 Detectives arrested a 30-year-old man Tuesday in connection with two armed robberies of convenience stores in Collier County, including one in East Naples in February in which the robbers wore masks.
Cesar Augusto Bertrand Zelaya, 1355 Mariposa Circle, North Naples, faces multiple counts of armed robbery, aggravated assault with deadly weapon and battery.
Detectives say there could be more charges as they investigate whether Zelaya is possibly linked to other robberies in Collier County.
Zelaya was identified after his vehicle was recovered at the scene of a robbery in Lee County on March 8, according to arrest reports. Authorities say two men robbed Carrabba’s Italian Grill, 27220 Bay Landing Drive in Bonita Springs around 1 a.m.
Detectives said Zelaya and another man held up Rose Food Mart, 6026 Radio Road, East Naples on Feb. 27. Both robbers wore black ski masks and Zelaya brandished a gun. They made off with an undisclosed amount of cash. Detectives released store video surveillance images of the robbers in the hope someone would recognize them and contact the Sheriff’s Office.
Zelaya is also charged with a Jan. 5 robbery at Atlixco Food Store, 11514 U.S. 41 E., East Naples. Detectives say Zelay and another man entered the business as employees were closing up for the night. They threatened the employees with a gun and demanded cash. They made off with an undisclosed amount of cash.
Detectives continue to look for the second suspect.
An investigation continues.

Posted by colliersheriff.org at 3:57 PM